Today we continue our series of character featurettes, this time with Starlina Murdoch, the teenage daughter of the famous seafaring merchant, Captain Zale "the Gale" Murdoch. Starlina has always hated the sea. Most can't blame her for it. One doesn't match her father's long list of achievements, accolades, and soaring reputation without being fully devoted to their work...and almost entirely absent from family. 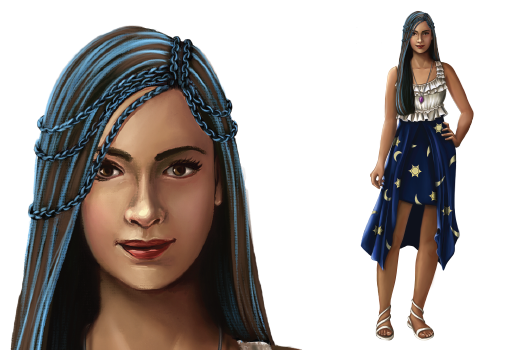 Starlina's birth mother was something of a fling for Zale during his wilder past days, as the two neither married nor had a very long-lasting relationship. Her mother was originally from the province of Sharm and something of a trollop, having hooked up with Zale for the thrill of being with a high-profile sea captain. She stayed in Warvonia throughout Starlina’s girlhood, making it possible for Zale to see her whenever he was between voyages. As she grew, she only lost respect for her mother’s lifestyle, and it frustrated her all the more that her father was hardly ever around.

She and Jensen saw each other as children, usually during social gatherings amongst members of the seafaring mercantile guild. Their relationship grew and became more intimate as they entered their teenage years, until clearly friendship had blossomed into romance. But Jensen wanted to be a sailor, a reality that Starlina shoved into the back of her mind for as long as she possibly could. When inadvertently forced into the voyage for the Grimstone, she is finally forced to face this reality and choose her path. Where that path ultimately leads, however, is anyone's guess.…